The accepted ideal for American women in the early 1800s was that of the virtuous housewife. A body of literature and thought sprung up to support this notion, as an increasing number of families became prosperous enough to avoid the drudgery of farm labor.

The immigrant women who arrived from Europe did not share in this luxury. Many became domestic servants, and they sometimes did so in a state of debt bondage. Because they usually spoke English, Irish women were hired for these jobs in large numbers.

Wages were generally low in the early United States. There was not a lot of physical money in circulation, and most people made their living on farms. Because labor was cheaper, it was much more common for families to hire domestic servants — some of the wealthiest houses kept a staff of ten or more on hand. These women cooked meals, cleaned house, cared for the children, made the beds, and other tasks of that nature.

Many of them came as indentured servants or “redemptioners” — meaning that they worked for room and board to pay for their passage to the United States. After a no-frills journey, they would begin a labor term of four to seven years. During this period they were treated the same as slaves — they could be tracked down by bounty hunters if they fled. Women generally had their term extended if they became pregnant. Until mid-century, debtor’s prisons were common and anyone deemed not to fulfill their end of the agreement could be thrown into one. Women were also vulnerable to sexual assault, since they had almost no legal recourse to pursue claims.

Complaints by American women of the insolence, ingratitude, and ignorance of their Irish maids were commonplace in written works. The domestic skills of these immigrants were said to be lacking. For instance, in this passage by Harriet Beecher Stowe…

“For some time, therefore, after the inauguration of the new household, there was trouble in the camp. Sour bread had appeared on the table; bitter, acrid coffee had shocked and astonished the palate; lint had been observed on tumblers, and the spoons had sometimes dingy streaks on the brightness of their first bridal polish; beds were detected made shockingly awry: and Marianne came burning with indignation to her mother.”

For those who weren’t indentured, turnover was high. Invariably this was blamed on laziness and insolence.

Anti-Irish Catholic Prejudice as an Excuse for Lurid Fiction

The Catholicism of the new arrivals was disconcerting to most native American women. Their ethics and religion were deeply Protestant. The contradiction of trying to raise Protestant Republican children with Irish Catholic servants was never quite reconciled, though it was frequently alluded to as a problem. 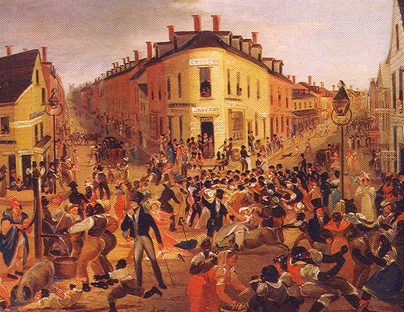 Some authors began to print lurid descriptions of Irish life, ostensibly for public education. A genre of literature emerged in which the lascivious traits and heretical religion of the new immigrants. The men who wrote these books were probably opportunists — for they had a near monopoly on the publishing of content about drunkenness, promiscuity, and other such taboos. One such example cited is George Bourne’s 1834 book, Lorette: The History of Louise, Daughter of a Canadian Nun, Exhibiting the Interior of a Female Convent.

In general, these works reinforced the notion of a Protestant-normative America, while presenting Irish and Catholics as outsiders and usurpers. Among men, this would eventually lead to the Know-Nothing Party, but it’s a mistake to think that women were oblivious to this strain of thought, or that they did not participate in it.

Off the Job — Living in Poverty

Most of these Irish women worked in cities on East Coast, such as Philadelphia, New York, and Boston. Once they landed in the new country, they often didn’t have the means or the knowledge to venture elsewhere. In these cities men, women, and children were crammed into sprawling, degraded tenements. The problems were worst in New York. 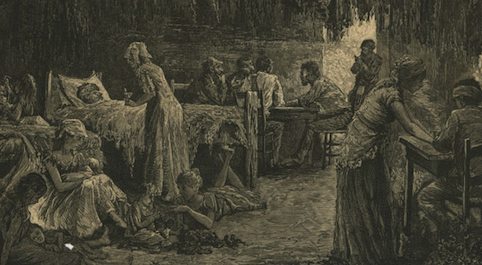 -A tenement interior as drawn in Harper’s Weekly.

The tenements functioned without sewage and sanitation. Families with children were crammed into rickety wooden buildings and often into the basements, which had no protection from the ground water. The floor was usually flooded with several inches of stagnant water, and mixed with garbage. On any level, the rooms were subdivided with artificial walls, to the point that many had no windows or ventilation. This caused boards to rot, disease to flourish, and mold to fester. Rats were endemic and scurried amongst the rooms as people lived and slept.

Typhoid fever was the most common disease, followed by tuberculosis and cholera. Infant mortality was very high — no public health statistics are available, but it was perhaps 30-40%.

When there were downturns and the jobs became scarce, it became even worse in the Irish slums, as idle men listed about, drinking and starting fights with each other.

This is just a brief overview of the degradation that awaited Irish women for their first years in America.